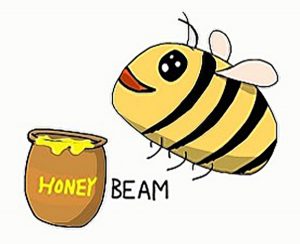 George Watson’s College is an independent school in Edinburgh for pupils from pre-school to Senior 6 (ages 3 to 18 years). 30 students from George Watson’s College who attended the Project Soothe workshops expressed an interest in taking part. 9 of these students grouped together and chose the team name ‘Honey Beam,’ to create a book titled ‘The Soothing Adventures of Bea.’ Below, the Honey Beam team have written about how they designed, piloted, and evaluated their tool.

Can you tell us what your aims for designing your wellbeing tool were?

Yes, our main aim when we were designing the product was to produce something that would be useful. We recognised that it can

be difficult to know how to reduce stress and simple and effective ways of doing this. We wanted to give people tips and advice on ways that they could help themselves to reduce stress and become more relaxed. We knew that we wanted to incorporate art into it because it was accessible to all and if it was aesthetically pleasing, people would want to use it more. We also wanted to make it easy to follow and something that could be used multiple times so the person could keep coming back to. We originally planned on printing physical copies of the book to give to our participants, and they could test this over time and then fill in a questionnaire on how they felt about it. Due to Covid-19 this changed into an online book and questionnaire which is accessible to many more people, and we can sample it on a wider age range. However, we are now also going to use physical books as well and the participants are allowed to keep the book afterwards.

What ideas did you have for your tool, and what did you decide on?

When we were brainstorming ideas on how to use Project Soothe images, we initially came up with ideas for a jigsaw, music playlist and a book. The jigsaw would be based on a soothing image and would allow students to sit quietly and complete a stress-free task. The playlist was a list of songs we thought would be calming for students to listen to. We thought about including songs that you can listen to – to soothe yourself and reduce stress – while also using the project soothe images.

Our final idea was to create a 40-page illustrated book about a character named Bea who goes through a series of tasks to reduce stress which the reader can also take part in. Examples of the activities include cooking, doing yoga and listening to soothing songs. We have designed the book for the user to be able to pick it up at any time for a chance to try an activity to reduce their stress levels.

Were there any obstacles you had to tackle in designing your tool?

One of the issues with our music playlist was that due to copyright issues with the music we were unable to pursue that further. The jigsaw was limited to being in one location and was just one task as well as only using one picture. We were worried about the cost of producing it as well. One of the biggest challenges with the book was time constraints as the S6 pupils involved were also juggling university applications and exam revision. Covid also played a significant role as all meetings then had to be online and we couldn’t meet in person to make changes and discuss the tasks.

How did you plan to collect data and pilot your tool?

anyone from the general public to use, we have increased our number of participants that are evaluating the effectiveness of our tool, and we have also increased the variety of the backgrounds that participants come from. This is useful as the more participants’ feedback we have, the more reliable the evaluation of our book will be. For the printed copy of the book, we are planning to recruit participants from our school to test it out, specifically pupils who are in S2 or above and online questionnaires will be used to feedback information. To recruit pupils, we plan on the year heads sending a message out through emails, google classroom and year meetings. By having the printed copy. We can also focus on teenage mental health in particular and the effect of the book as well as comparing results between the printed and online books.

We have decided to recruit at school and throughout a variety of year groups, focusing especially on S4’s as this is their first year of doing exams, so we think that our book would have a significant positive impact upon them. However, the advertisements went out to all year groups.  The aim was to get around 50 participants as many pupils are increasingly busy within the school and with there being two different Young Citizen Scientists’ studies being conducted in the school, we thought that would be a realistic number.

Each of the pupils in the group encouraged friends and siblings to join the study in person. Notices advertising the study were also put into the pupil bulletin, the staff briefing and the parent digest to encourage participation. To recruit participants, we sent a survey to pupils in the school from S1-S6 directly to their email addresses as well as putting it into an online space for each group controlled by the guidance staff. We asked guidance to identify specific students to take part; however, we were advised that was not the best way to recruit participants or test the tool generally.

Can you describe to the readers what ‘The Soothing Adventures of Bea’ looked like, and how you evaluated it?

We had the book made by an external company who printed it bound with a glossy cover. It is an amazing book full of ideas for soothing activities such as yoga, listening to music, cooking and baking. We used a software called Pixelmator to create the illustrations and put together all the images. All data collection has been done online, through google forms and an online survey platform.

Specifically, we followed this procedure:

How successful was your tool?

Demographic Information: We recruited 25 participants, of which 14 completed the full study, from our school to pilot the Honey Beam wellbeing tool. This is a drop-out rate of 44%. The tool was a paperback book about The Soothing Adventures of Bea. Participants were pupils aged 12-17 years old. In terms of gender, 13 participants identified as female, 0 as male and 1 as genderqueer.  Most participants (92.9%) were White and 7.1% Asian.

All participants completed an online questionnaire to gather demographic information and baseline mood and wellbeing data before collecting a copy of the book to test over a two-week period. After this, participants were invited to complete a second online questionnaire to gather feedback about their experience of using the book and to see if the book had influenced their mood and wellbeing.

Book Reviews: When sharing their experience of using the book, 92.9% of participants reported that they could relate to the main character Bea. We think this is because students at school can feel stress regularly in a very similar way to Bea due to schoolwork and other external factors.  Also, Bea being she was a similar age made her more relatable. The drawing and illustrations were a very popular feature, and participants made comments such as “Really nice graphic design and layout.” Linking to this, many enjoyed the choice of fonts and the overall artistic feel of the book, and participants said they were useful in distracting participants from stress.

The suggestions for coping mechanisms were useful and participants liked the variety of ideas offered to them this included the recipes and music which many felt they could complete easily: “I enjoyed seeing the different things it offered”.

When describing how they used the book, 42.9% of participants reported that they read the whole book before re-reading the parts of the book that they liked most to try those activities. 28.6% reported that they flicked through the full book then read the parts that interested them most. 7.1% read the full book and stopped along the way to try the activities that appealed to them most. Interestingly, 21.4% of participants read the whole book but did not try any of the activities.

92.9% of participants used the book a few times during the two weeks, while 7.1% reported using it most days. This shows that the book was useful to many and they felt it was a practical tool they could keep revisiting. Participants reported that they spent between 15-45 minutes each time they used the book over the two-week period.

To calculate how soothing the book was, we have classed any rating between 6-10 as ‘soothing’ to keep things simple. The percentage scores were added together to give an overall percentage of how soothing participants found the story, activities, photographs, and artwork.

The top 5 activities in the book found to be most soothing were:

The top 5 activities in the book found to be least soothing were:

The book featured 6 photographs (shown below) from the Project Soothe gallery @ www.projectsoothe.com.

Overall, 64.2% of participants found the book ‘quite soothing’ or ‘very soothing’ overall, while 64.3% found it ‘quite helpful’.  57.1% said they would use the book again to help improve their mood and wellbeing, while 50% said they would recommend the book to friends and family. Participants suggested that the book could be improved by adding in a wider range of activities such as artistic or creative tasks such as drawing, a bigger range of things to cook, and specific places to walk to.

The participants enjoyed using the book, as indicated by several of the quotes received in the questionnaire, including “I didn’t have too much time to read it but when I did it made me calmer. I really liked it and I will keep reading it!”. This does indicate that a longer study period might have made more of an impact, as two weeks is not a huge amount of time to do a lot of the soothing activities, such as making brownies and pizza. A positive is that the pupils indicate that they will continue to use it after the study has finished: “It was very fun to read based on the way it was written and the colours. I’ll look forward to coming back to it.” 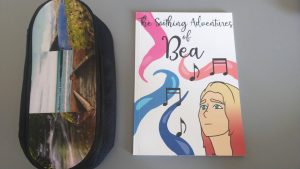