In addition to the Honey Beam team, a second team from George Watson’s College was formed. It was run by five students, and they decided on the name ‘Soothe Case’ for their team. This team designed a pencil case with soothing images on it and chose some sensory items to fill it with. Below, we have talked to the team to find out how they designed, piloted, and evaluated their tools.

View photos of the Soothe Case

What were your aims for this project?

The main aim of our project was to help reduce stress and to increase the happiness of participants using a comforting pencil case. We wanted to design a tool that would be easy to use, and make it easier to do schoolwork, while also staying calm and happy. We decided to measure the mood and stress levels of participants both before and after using the pencil case, to see how this affected them. We measured this using an online questionnaire. Pupils in S1-S6 were invited to participate.

What ideas did you have for your wellbeing tool?

We decided we wanted to design a pencil case to promote wellbeing. We brainstormed different ideas for the name of the pencil case and asked a focus group of pupils for their opinions. In the end, we decided on ‘Soothe Case’ as the name as this was most popular. We also spent time thinking about the design of the pencil case and whether to have a pencil tin or a softer case. In the end we thought a softer case would be more comforting. Inside the case we wanted to include an item for each sense (e.g. a scented eraser, a fidget toy/stress ball and a glittery, colourful pen). We decided to make two different pencil cases with different images so that participants could choose which one they liked best. This made it more personal.

Were there any barriers that you had to deal with?

One of our main barriers was the price of the pencil cases. Originally, they were going to cost too much, so for a while we pursued the idea of a “Pencil Tin” instead of a case. In the end we decided to get back to the soft case as we decided it would be more effective at relieving stress and increasing happiness than a tin. We managed to find a voucher code so we got 40% off our cases, so in the end we could order more. Another idea we had was that everyone could choose the images on their case, in the end this was too impractical so we came to a compromise and added a blank photo keyring which could be personalised, to the items in the case. We also designed two cases so people could choose the images they liked best.

Can you tell us more about how you planned to recruit and pilot your tool?

Yes, we chose to recruit through the school’s pupil bulletin and the parent email. It was open for any pupil from S1 – S6 so anyone could take part. As we were asking about mood and feelings, we asked parents to fill out a consent form to make sure it was alright. For collecting our data, we decided to ask pupils to complete a questionnaire about their mood over the last 2 weeks, before they collected the pencil case. This would act as our baseline for the experiment. We would then give them the soothe case and after a further 2 weeks ask then to complete a second questionnaire, almost identical to the first, to see if the case has had a positive impact.

For our trial, we recruited around 50 participants on a first come, first served basis from S1 to S6 in our school, (11-18 years old). We did this out of practicality. We could only afford 50 pencil cases and we had easy access to people in the age group, as well as school pupils having a good use for a soothing pencil case. The online form required volunteers to choose a unique username, this would be used later to match the data from the two questionnaires that they would complete: one before testing the soothe case and one after. We also said that volunteers get to keep the pencil case afterwards.

Could you tell us in detail about the final design your team agreed on?

To create the actual pencil case, we ordered the base pencil cases online with custom images printed onto them which we chose from the Project Soothe database, then we filled the pencil cases with useful and fun items. Specifically, this was: mechanical Bic pencil, a coloured gel pen, a scented eraser, a keychain to hold an image, a random squeeze toy, a zipper pull, and a stringy stretch ball.

Specifically, we followed this procedure:

We had research team meetings every Monday and in these we decided on everything, after we had gotten the idea of a pencil case, we decided on how we would trial them. We followed the following steps to build and pilot the soothe case in school:

How successful was your tool?

Most of our participants (80%) said they found the soothe case soothing. To simplify the original results the top 50% of the scale was counted as soothing, and the bottom 50% was counted as not soothing.

Most of our participants used the case every day, if not most days, during the two-week trial.

Participants overwhelmingly liked the fidget toys the most, followed by the images and general outside appearance of the soothe case. Some of the responses to the question included: “I liked that there was a variety of items to choose from,” and “the pictures on the case were very pretty and the stress ball was fun to play with.”

Participants did not like certain items in the soothe case, with one participant stating, “There was nothing in it that I would ever use in class apart from the pen and pencil,” and some participants didn’t like the images on the soothe case, although the majority commented that the images were soothing and made them feel happy when they looked at them. The most common thing people wanted was to have more soothing items, and suggestions included a larger stress ball, a mini diary and a fidget cube. There were also some other requests for more stationary and colouring pencils. 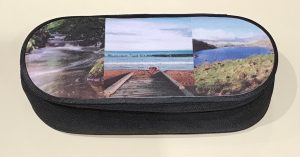